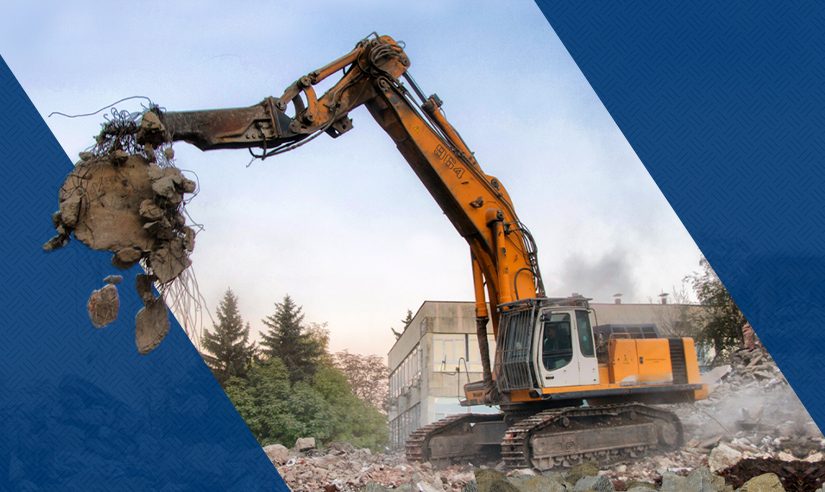 Three companies have been sentenced for Health and Safety breaches following a fatal incident during the demolition phase of a regeneration project in Newport on the Isle of Wight.

Ryde Demolition Ltd had been appointed to conduct part of the demolition works on a residential redevelopment in 2016.

On 13 October 2016, David Shayler, an employee of Ryde Demolition Ltd, suffered a fatal head injury as he conducted his daily work.

Mr Shayler was removing roof timbers by hand with a colleague when the gable wall of the structure collapsed, leading to debris striking his head and neck.

He died 6 days later in hospital as a result of the injuries sustained.

An investigation by the Health & Safety Executive (HSE) found that the work was inadequately planned and managed by all duty holders.

The technique used to remove the roof timbers was done out of sequence, and the brick gable had been left unstable.

It was also identified that inadequate provision to reduce the risk of falls from heights was made, despite complaints from site operatives in the days leading up to the incident. Scaffolding was only erected to one side of the structure with no fall protection elsewhere.

Management of control measures by all duty holders were overlooked with no adequate monitoring of site procedures to check that operatives were following the demolition plan method statements.

The hearing took place at Portsmouth Crown Court where all three duty holders pled guilty to their charges and were sentenced accordingly.

Ryde Demolition Ltd were sentenced under Section 2(1) of the Health & Safety at Work Act 1974 for failing to ensure, so far as is reasonably practicable, the health, safety and welfare at work of all their employees. They were fined £80,000 and ordered to pay costs of £12,132.

H J Bennet Ltd were sentenced under Section 3(1) of the Health & Safety at Work Act 1974 for failing to ensure that, so as far as is reasonably practicable, that persons not in their employment who may be affected thereby are not thereby exposed to risks to their health or safety. They were fined £120,000 and ordered to pay costs of £12,057.

Stoneham Construction Ltd were sentenced under Section 13 (1) of the Construction (Design and Management) Regulations 2015 for failing to ensure that, so far as is reasonably practicable, construction work is carried out without risks to health or safety. They were fined £56,667 and ordered to pay costs of £12,004.

Speaking after the case, HSE Inspector Dominic Goacher stated “This was a tragic and wholly avoidable incident, caused by the companies’ failure to implement safe systems of work.

“Demolition is a high-risk activity whose safe execution is complex and technical and where expertise is vital. The risk of unintended structural collapse is well known within the industry. Demolition requires careful planning and execution by contractors who are competent in the full range of demolition techniques.

“Falls from height remain one of the most common causes of work-related fatalities in this country, and the risks associated with working at height are well known.

“In this case the risks of structural collapse and falling from height were not controlled, which led to the preventable death of a father-of-two.”

“TL Dallas has provided trade credit insurance for the last 10 years, which has bought great peace of mind, whilst supporting the company’s growth. The TL Dallas team ensures that ACS can secure credit insurance cover for new and existing customers, as well as giving the best advice on slow payers and claims. They have recently helped with an appeal regarding the payment of a claim, helping with cash flow. The pride they take in their work is truly inspiring going above and beyond. Thank you for everything you have done and continue to do for ACS."
Leanne CleghornACS Technology Group Ltd
“We have dealt with TL Dallas for many years and have always found the staff to be very helpful and professional in all that they do. They are able to provide specialist knowledge and a bespoke service tailored to our specific needs, and the fact that they have an office on Shetland is a huge positive.”
Gary SpenceLHD Ltd - Lerwick
“Truly a job well done and really appreciate all the discussions on our behalf.”
“I have been most impressed by the customer service from TL Dallas when a problem was discovered in the bathroom of a property which I own, and which is rented out. They were very patient when personal issues caused a delay in a quote coming to them and again when there was a delay with the invoice. We also couldn't be more delighted with the swift payment of our claim by the claims handling team at Aviva.”
“Just a brief note to say how grateful I am for all your help sorting out the hotel policy this year. Over the years I have valued your cooperation in getting not only the most appropriate cover but at the best price.”
“I immediately recommended TL Dallas given the experience and the excellent service levels we have enjoyed at our company.”
“Three generations of Whitby Morrison have worked with TL Dallas for insurance needs. The support and service received just gets better year on year. The team are always on hand to offer guidance and advice whilst scouring the market for the perfect balance between price and product.”
“As a business we have worked with several members of the TL Dallas team, and yet it always feels like you’re dealing with the same person. The transition is always seamless, and their customer knowledge is second to none. As a client, you really do matter to them.”
"Whether you’re an established business, just starting out, publicly or privately owned, TL Dallas will take care of your every need, product, and price.”
Ed Whitby
“I just wanted to say once again how impressed I always am with your team – no matter who I speak to – and I think that’s very special. Your team are always excellent with their service and we always tell as many people as possible about you! I just wanted to pass this on, as you are clearly doing something very right and have been for a long time!”
“Thank you for your excellent service over the years.”
“Thank you so much for all your help and ongoing advice. It is so good to have someone advising us who is local and has so much understanding, not only of the business, but all the other influencing factors, as well and who totally understands what our business needs.”
Mary SharpShetland Control Systems Ltd
Previous
Next

We use cookies to improve your experience and enable certain functionality. You may delete or block cookies from this site, but parts may not work. By clicking any link on this page you are giving your consent for cookies to be placed on your device. Read More